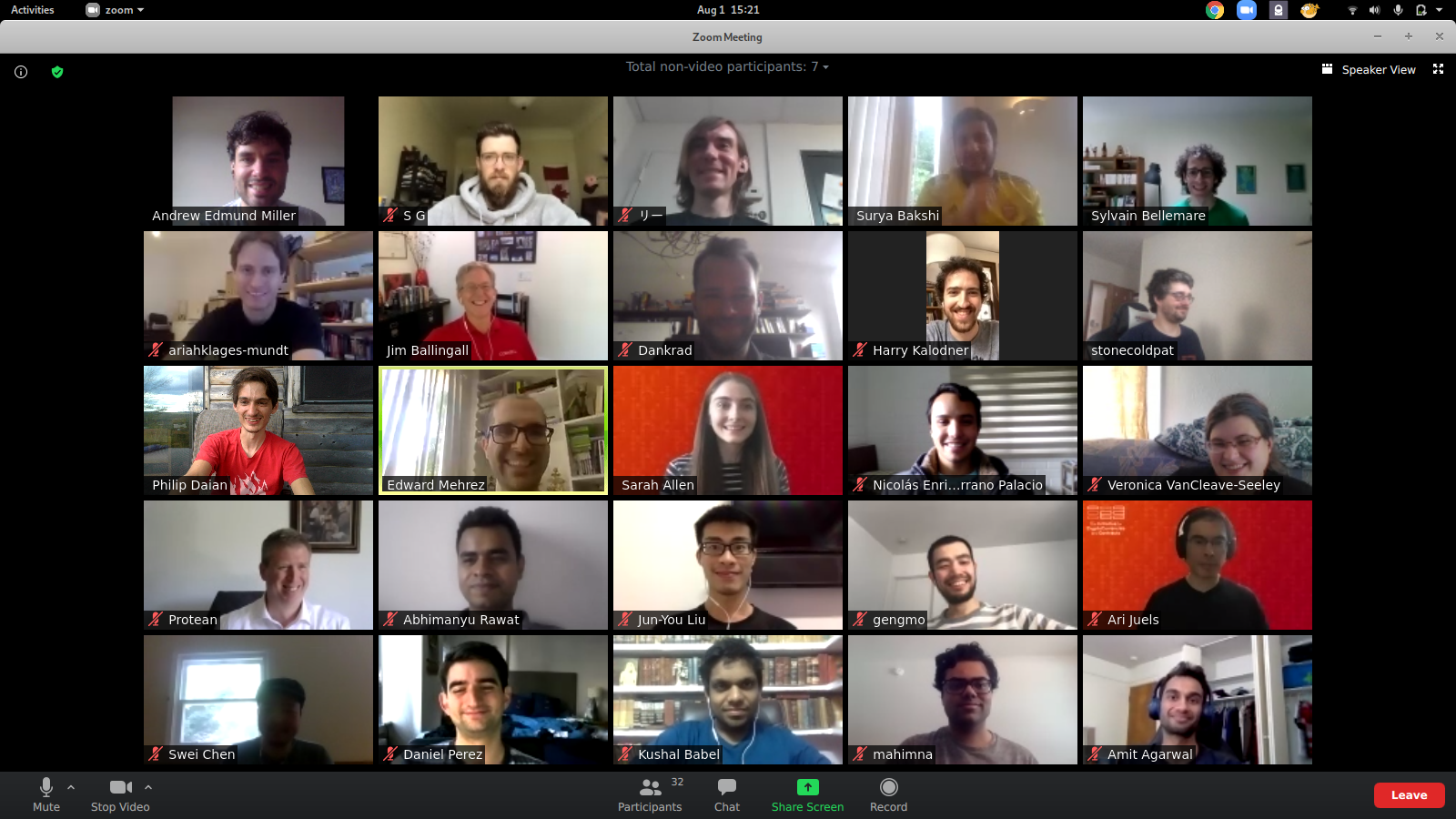 We took this partial group picture via Zoom on the last day after coding project presentations.

What Participants Are Saying

It was great to meet so many acquiantances in IC3 camp. As usual, I learned a lot from them as pioneers pushing the boundaries of blockchain research. This is our first time meeting with each other in a decentralized way!
- Jun-You Liu (PhD student, Cornell University)

Loved sharing with IC3 our journey to productionizing blockchain over the past 5 years, and how often it feels like being in a complex, fast moving, ever changing Tetris game! Building the Tetris pieces has been a blast. New pieces currently under construction. - Tyrone Lobban (Blockchain Production Manager, J.P. Morgan)

Prof. Ari Juels, IC3 co-Director, welcomed camp participants on Sunday, and shared some brief history of the camp and its impact on the community. The Camp Technical Commitee led by Patrick McCorry, with Surya Bakshi and Tyler Kell, gave an overview of the schedule and expectations, as well as introduced the folks proposing projects for the week.

There were five project teams that self-selected projects on Sunday after considering the project proposals. The teams coded throughout the week, and made project presentations and demos on Saturday (just like the in-person Camps in the past - albeit, totally virtual this year).

The top three projects were selected based on the quality of the research element, difficulty of the implementation, and future utility by our panel of judges: Patrick McCorry (Anydot), Harry Kalodner (Offchain Labs), and Dankrad Feist (Ethereum).

Summary: We developed a design for a robust stablecoin, which stratifies complex DeFi risks into segregated pools and grows a rainy day fund that makes the system more robust with time. We started the week by thinking about the general design, in terms of arhitecture and UI. On the modeling side, we formulated a minting fee model that reflects the value of insurance for a minter and constructed a segregated risk structure drawing from our risk framework from our recent paper. On the development side, by the end of the week, we developed a prototype of most of the core components and are now a few steps away from having a working proof-of-concept.

Ethereum and MPC for Private Computations

Summary: We implemented CryptoDNA-RoboHash, a CryptoKitties-inspired game with new gameplay elements based on secret information. Each Robot has a public phenotype that determines its visual characteristics, as well as a secret genotype known only to its that determines its breeding fitness. Robot breeding is implemented using Multi Party Computation (MPC) to compute a random function that combines the secret information from both parents. Our prototype was a mashup of RoboHash for graphics, a custom web3 frontend, the HoneyBadgerMPC toolkit, and Vyper smart contracts.

Summary: The contigency markets project explored how to create an on-chain market for "smart claims", i.e. smart contracts whose payoffs are contigent on off-chain events. An emphasis was placed on claims with payout distributions with unbounded support which are ubiquitous in traditional finance. The project entailed special considerations for pooled dynamic collateral determined by monetary risk measures as well as creating an appropriate set of ERC-20 tokens for he smart claims to be traded on a DEX.

Summary: The goal of ETHspy is to build a measurement tool with a focus on deanonymization. We set out to find interesting facts about the Ethereum p2p network and come up with heuristics to map transactions to their originators. Since one of our design goals was to have a lightweight tool, we didn't fork geth and instead opted to use the appropriate go-ethereum libraries. We were able to get node discovery and the peer handshake working throughout the week while learning about the internals of geth and the Ethereum p2p protocol. We plan on completing the tool after the bootcamp and hope to provide interesting analyses of the Ethereum p2p network to the relevant communities. Our github repo is here: github.com/eth-spy/eth-spy.

Summary: The Wheefi framework is a framework for reasoning about the effects of defi contract composition in Ethereum. To do this, we defined a series of mathematically formal and executable models that reflect real-world defi primitives on Ethereum like MakerDAO and Uniswap. We then used cutting-edge programming language techniques such as symbolic execution to reason about the effects of combining these components.

Monday through Friday featured talks open to the public by blockchain leaders from academia, industry, and the open source community. We had five panels featuring expert discussions on topics ranging from Central Bank Digital Currencies (CBDCs) to DeFi. Each day also included a birds-of-a-feather session, an open discussion centered around a topic of importance like consensus, ethics, or ETH 2.0.

The schedule featured talks, panels, and discussions Monday through Friday open to all, while Sunday and Saturday were open to the coding track.